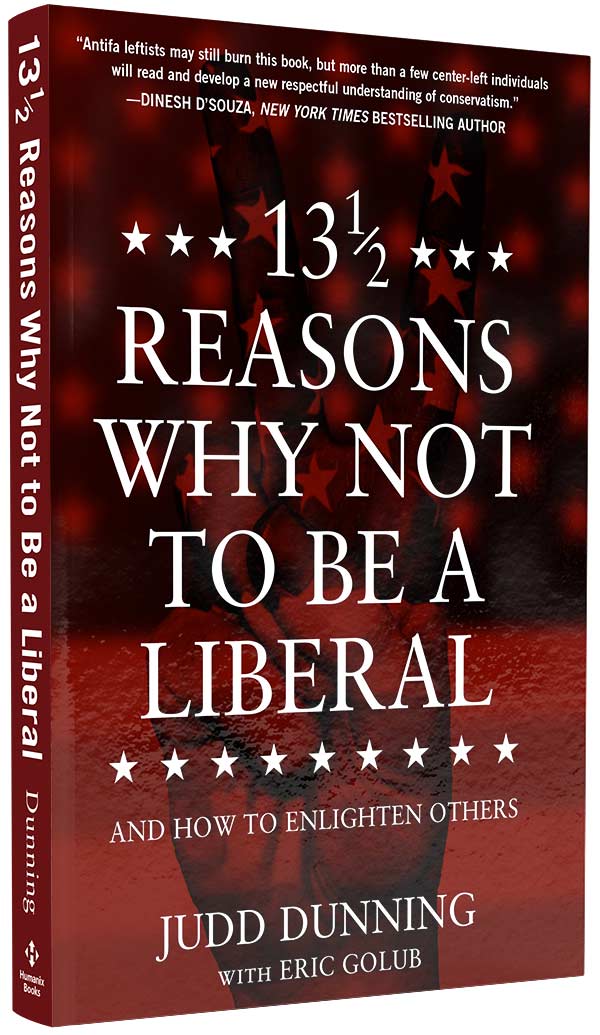 By Judd Dunning (with special contributions by Eric Golub)

It’s a situation we conservatives know well in today’s contentious political environment. We often find ourselves in discussions with liberals who relentlessly hammer us with insults, accusations and unfounded assumptions about conservatism. What are we to do?

The answer is 13 1/2 REASONS NOT TO BE A LIBERAL – And How To Enlighten Others, a definitive guide to persuasive facts and arguments that detail the policies, accomplishments and often-ignored compassionate nature of the conservative philosophy. Presented in an easy-to-access, footnoted format, THIRTEEN REASONS will empower readers not only to hold their own, but to also to change hearts and minds.

Our new timely, fiery, fun and insightful explanatory book focuses on modern conscious conservatism’s key 13 principles backed by facts, history and personal anecdotes. It also serves as a pragmatic easy to read handbook on how to intelligently argue American politics’ biggest current issues from the Conservative point of view point by point.

Stand by Red Blue and Magenta Nation, #13ReasonsWhyNOTtoBeALiberal is coming to publisher and bookshelf near you soon!

2. Life is not fair and people are inherently unequal: Free market capitalism and individual liberty

4. You are not a bigot: Colorblind conservatism and the myth of the GOP as racist

5. Justice does not need an adjective: Constitutionalism, social justice, and special rights

6. Life is not a safe space: Free speech vs. leftist political correctness

7. American exceptionalism is not a hate crime: Patriotism, excellence, and gratitude

9. Freedom is not free, might does make right, and reluctant interventionism is just: Strong military and foreign policy

10. Guns for (almost) everyone: Criminals by definition do not obey laws

11. Every nation secures its borders: Immigration

12. Violent anarchic mobs are bad: The decline of law, order and civility

14. Babies are beautiful and so are women’s rights: Abortion

“So glad I was able to cajole Judd into actually finishing 13½ Reasons Not to Be a Liberal—and How to Enlighten Others during the taping of Bulletpoints (our web series on YouTube) for a year! Well worth the wait!”

“Judd Dunning not only empowers conservative readers with the critical thinking and forensic tools to survive a liberal rhetorical onslaught, but also enables them to emerge from the battle with a convert or two as well.”

“My new lucky number is 13½, because of Judd Dunning’s eyeopening, insightful new book. If you’re a conservative or want to be, this is a must read!”

“The best teachers of enlightenment are those who’ve once lived in darkness. As a former liberal, Judd Dunning’s book, 13½ Reasons Not to Be a Liberal—and How to Enlighten Others, is an important tool that can potentially help you save family or friends duped by the (very) evil forces of the world. And after the onslaught of 2020, we all need as much help as we can get!”

– Ann-Marie Murrell, Bestselling CoAuthor of What Women Really Want and PolitiChicks: A Clarion Call to Political Activism and editor/owner of PolitiChicks.com